Cosmetics and The Ban on Animal Testing - Where Does the World Stand? 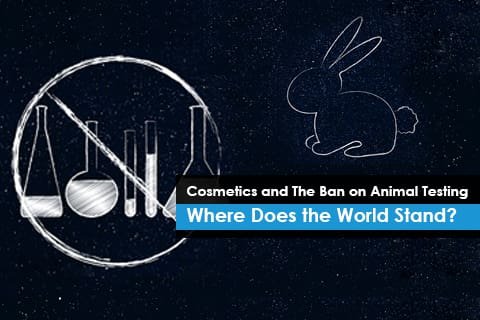 Animal testing has always attracted a lot of attention from the industry because of its controversial nature. From the last decade, Cruelty Free International (CFI) has been encouraging companies across the world to stop the testing of cosmetics on animals to create a harmonized, cruelty free global market. Even though a lot of companies claim to be cruelty free, many still rely on animal testing for accurate results.

In accordance with this, quite a few countries are taking measurable steps towards creating a cruelty free cosmetics market by imposing ban on animal testing and upgrading their regulations. Some of them are:

In February 2019, the Australian government passed a bill to completely ban animal testing for cosmetics. The Industrial Chemical Bill 2017 of the Australian government includes a ban on the animal tests performed on the cosmetic ingredients for the collection of relevant data. The ban is also applicable on the cosmetic ingredients used in another product sector. However, it is not applicable to medical testing and ingredients which have been tested in the past. The government has given a deadline until July 2020 for the companies to align their operations as per the new regulations. In association with the Humane Society International (HSI), they have also come up with a number of measures to ensure that all cosmetics are covered under the ban.

On May 3rd, 2018, the EU announced a complete ban on animal testing for the cosmetics industry. Companies are given time till the year 2023 to ban animal testing on cosmetics completely. The EU has also banned the sale of all cosmetic products which have been tested on animals since 2013.

Canada has also taken a step towards creating a cruelty free market. In order to do so, the Senate of Canada has passed Bill S-214, Cruelty Free Cosmetics Act. The bill is forwarded to the house of commons for review. According to the bill, sale of cosmetics which are developed following animal testing is strictly prohibited in the country. The bill also includes a phase-in period for the companies to allow them to comply with the new regulations.

Likewise, countries across the world are gradually accepting that the cosmetics can be manufactured without harming animals. Hence, they are finding alternatives for animal testing methods to comply with the regulations of their respective health authorities and to stop animal cruelty. Are you aiming at entering the global cosmetics market? It is advised to consult a cosmetic Regulatory expert to understand the local cosmetic regulations. Stay up-to-date. Stay compliant.