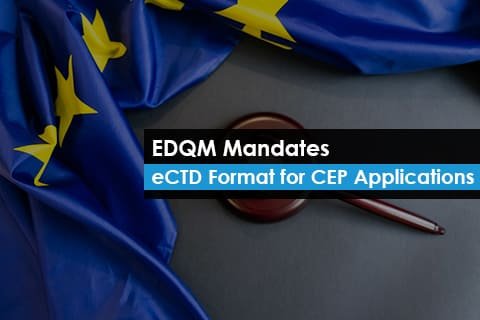 In July 2019, the European Directorate for the Quality of Medicines and Healthcare (EDQM) has announced that eCTD format shall be mandatory for all Certificate of Suitability to the monographs of the European Pharmacopoeia (CEP) applications including notifications, revisions, renewals and new applications. The announcement was made as part of the revised roadmap (2016-2020) for electronic submissions for CEP applications.

Motive for Revising the EDQM Roadmap

Initially released in 2016, the EDQM’s roadmap was revised to develop the current processes for submission of electronic data related to CEP applications as per region-wise specifications of EU countries. The revised roadmap is aimed at including the following improvements by mandating the eCTD format.

According to the EDQM roadmap, the eCTD mandate will be enforced from January 1, 2020 after which the directorate will not accept NeeS submissions for all CEP applications including notifications, revisions and renewals. Although the revised roadmap states that ongoing procedures shall remain unaffected, it also notifies that any changes to existing dossier’s format to eCTD, the conversion process must be treated as a new process.

With a focus on improvising the submission standards in European Union, the EDQM has introduced the eCTD format for CEP applications. With deadline less than a year away, the CEP applicants should start aligning with the eCTD format, right away, for successful compliance. But what kind of documentation you require to obtain a CEP? How they are validated and assessed? Consult an expert to get insights. Stay informed to be compliant.