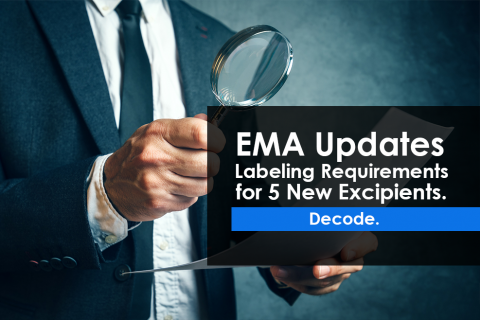 Do you know? Excipients which are used in drugs, thought to be inactive, but in some circumstances, they may lead to severe reactions. To safeguard patients from such adversities, the European Medicines Agency (EMA) has updated its annex to the European Commission’s guideline on the labeling of five new excipients.

The document on excipient labeling requirements and safety information has been in effect since 2003 referring to excipients that are “known to have a recognized action of effect” must be declared in a medicine’s label and package leaflet to provide additional safety for the users. For the first time since its published in 2003, it has been updated and the EMA has asserted that the revised annex includes new safety information that must be listed in the package leaflet advisory disclamations for the users. In addition, the safety warnings required for 10 other excipients are also expanded by the agency.

The five new excipients, which the EMA listed includes:

With the agency declared that the suggested changes will come into effect immediately for all medicine registrations, centrally/nationally, all Marketing Authorization holders are required to update the same with the upcoming submission. In case of no upcoming Regulatory submissions to be made, the sponsors are mandated to submit a Type IB within next three years detailing labeling changes. Being prepared for the upcoming submissions with compliant labeling practices, however, requires a comprehensive understanding of the EMA updates. To navigate the Regulatory complexities, consult a local Labeling expert.