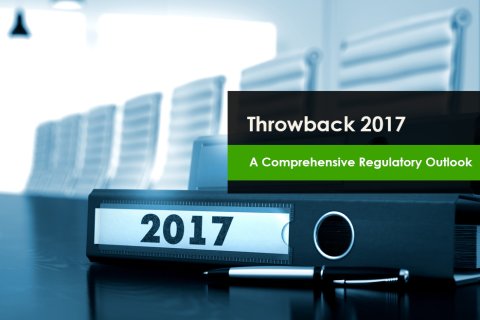 The year 2017 was an eventful year for the Regulatory space, with several major happenings taking place across various industries such as: Pharmaceuticals, Biologics, Cosmetics, Medical Devices (MD) etc. While the MD industry witnessed the strengthening of MD regulations across the EU, the cosmetics industry saw advancements in the form of improved guidelines for cosmetic product safety. There were some mandatory developments in codeine regulations for the Pharma industry.  As the year 2017 witnessed transformative events on a regular basis, let us bring you a comprehensive Regulatory outlook of life sciences industry.

EU to strengthen medical devices regulations: Triggered by several scandals that involved the use of substandard medical devices, including the use of below-par silicone products and substandard hip implants, the European Union (EU) planned to implement tougher rules governing the safety and monitoring of medical devices. These regulations were adopted by The European Parliament unanimously, without any amendments.  Ultimately, these proposed regulations, an outcome of multi-year negotiations would include:

Changes to Existing Device. When to Submit a 510(k): The US Food and Drug Administration (FDA) has finalized the guidelines on changes in medical devices that would need a 510(K) submission.

The guidance is expected to aid manufacturers of:

The guidance is not to address:

Premarket Notifications and FDA’s Exemption for Class II Medical Devices: the Food and Drug Administration (FDA) has identified a broad list of Class II medical devices that, when finalized, will be exempted from premarket notification requirements, subject to certain limitations per se. The FDA has published this notice in accordance with procedures established by the 21st Century Cures Act, and is now looking forward to public response in the form of comments.

FDA’s Ban on Powdered Medical Gloves and Key Factors It Entail: Citing the evidence that the use of powdered medical gloves poses an unreasonable and substantial risk of illness or injury to patients and other individuals who are exposed to them, the US FDA proposed the ban right back in March 2016. The ban applies to:

TGA’s TGO 91 and 92 Amendments: Since 31st August 2016, the Therapeutic Goods Administration (TGA) is continuously working to update its guidelines for labeling of medicines supplied in Australia to ensure companies be aligned with international labeling best practices and reduce medication errors. As part of the ongoing changes, following the recent updates in August, the Australian Health Authority, post consulting different stakeholders and decoding their views, has announced few amendments to the new labeling orders.

ANDA Vs 505(b)(2): In recent years there has been an unprecedented increase in the number of submissions of Abbreviated New Drug Applications (ANDAs) and 505 (b) (2) applications, mainly owing to the spurt in the number of follow-on insulins submitted via the 505 (b) (2) pathway and with a record increase of generic drug applications submitted and approved via the ANDA pathway. While both the submission processes are considerably varying from one another, the US Food and Drug Administration (USFDA), in its recently released draft guidance, elaborately explains the difference between both submission pathways and how should the applications be submitted for the benefit of potential drug developers.

Codeine Medicines Attract FDA Label and TGA Advertisement Changes: Codeine medicines seems to have attracted all the attention; not for the ways they are to be used, but for the ways they need to be labelled and advertised. To protect children from serious risks, two top most health authorities, the US Food and Drug Administration (USFDA) and the Therapeutics Good Administration (TGA) have rolled out label and advertisement changes. Let us take a quick look at the individual announcements.

Turkey Pharma Packaging Set for New Regulations: On April 25th, 2017, the Turkish Ministry of Health published the Regulation on Packaging Information, Inserts and Tracking of Medicinal Products for Human Use in its Official Gazette. The Regulation on Packaging and Labeling of Human Medicinal Products published on August 12th, 2005, has been hereby revoked. Overall, the new regulation is said to be governing the requisite information on packaging inserts of medicinal product for human use and principles as to the type of notifications to be made by sellers or importers for tracking of the pharmaceutical distribution chain.

FDA Introduces FAERS: Are you a drug or biologics manufacturer willing to submit adverse event (AE) report with respect to your product to the United States Food and Drug Administration (USFDA)? Or are you a healthcare professional or a consumer planning to report AE or medication error to the US health agency and/or willing to access the safety information related to a specific drug? Then, here is an announcement for you. The USFDA, on 27th Sep 2017, has officially launched searchable public dashboard for its drugs and biologics AE database. It is known as the FDA’s Adverse Event Reporting System (FAERS).

USP 800: To oversee requirements pertaining to hazardous drugs (HD) handling in healthcare facilities, the United States Pharmacopeial Convention (USP) has recently developed a chapter, USP <800>. Beginning July 1, 2018, all entities that handle hazardous drugs must incorporate the standards determined by this chapter into their occupational safety plan. The state of California, however is an exception to the rule, which in turn has planned to implement the standards from July 1, 2017.

EMA Announces eSubmission Roadmap: Life Sciences, as an industry is rapidly evolving, so does the Regulatory requirements to sustain in the industry. With a goal to spread digitalization across each and every aspect of market authorization of medicinal products, national drug regulatory authorities across the Europe along with the European Medicines Agency (EMA) have recently updated a document titled “eSubmission Roadmap”.

DMA Announces eCTD and VNeeS Timelines: The latest announcement from the Danish Medicine Agency (DMA) specifically points out elimination plan for NeeS format and emphasizes the consequent transition to eCTD for human domain / VNeeS for veterinary domain as directed in the eSubmission Roadmap. With the reports, it is to understand that the electronic format requirements will apply to both new applications for marketing authorizations of medicinal products as well as maintenance of variations or renewals. The changes, however, will not apply to parallel import and distribution.

Overall, 2017 was quite an eventful year for Pharmaceuticals and Medical Devices industries. Though there were no major regulations took place for Cosmetics, Biologics etc. we are sure there could be some influencing factors, which we might have missed out to publish. With these developments observed and practiced, we, as a proven Regulatory partner, are working towards mandates set for 2018 and farther for the benefit of compliance for our clients. Let’s CONNECT.