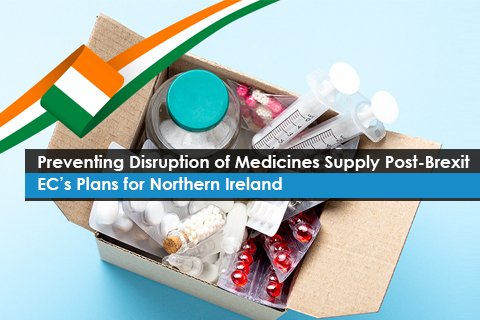 Based on the European Commission’s (EC) proposal on facilitating the movement of goods from Great Britain to Northern Ireland in October 2021, the Commission has now set up plans to maintain the medicines’ supply in specific markets post-Brexit.

As per the Brexit arrangement, Northern Ireland, a part of the United Kingdom, falls under the European Union’s regulations to avoid a hard border on Ireland. This makes it difficult for people residing in Northern Ireland to avail certain medicines as they have to be available in the markets of Great Britain (England, Scotland, and Wales) before being marketed in the former region. As the transitional arrangements of Brexit are nearing their end, the markets are predicting medicine shortages in Northern Ireland owing to the proposed Regulatory barriers in the Irish Sea.

The proposed steps/plans are yet to be adopted by the European Parliament and the Council. Once done, the EU will give the UK unique responsibility for authorizing medicines in Northern Ireland. This responsibility is based on the assumption that the UK will comply with the EU law on the safety, efficacy, and quality of human medicines. The current transitional arrangements are effective until the end of 2022, and the legislators have time until then to adopt these new proposals.

Countries like Malta, Cyprus, and Ireland, which are not part of the UK, but were dependent on it for the import of pharmaceutical products, have also been covered in the EC’s new plans. They are meant to have the same rules as Northern Ireland. These four (04) countries are likely to benefit from these new proposals for three (03) years. During this period, pharmaceutical companies in the UK will be able to import medicines into the aforementioned countries without holding marketing authorizations or repeating batch testing.

If you are a drug manufacturer and wish to stay abreast on all the latest import regulations post-Brexit, you will need the support of an expert Regulatory partner. For a cost-effective and time-saving pathway, reach out to Freyr, a leading, end-to-end Regulatory services provider.