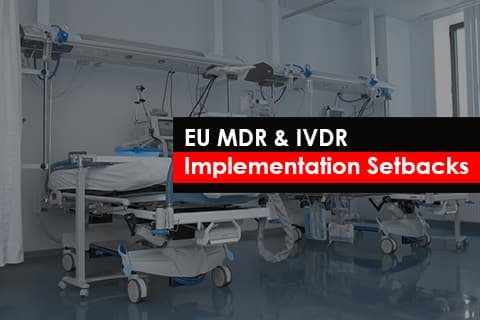 The European Commission’s (EC) Medical Devices Regulation (MDR) and In-vitro Diagnostics Regulation (IVDR) have been the most significant developments for medical device manufacturers willing to enter the European market. These regulations will allow the EU (European Union) regulators to have the required control and oversight of the medical devices entering into the market. The MDR and IVDR aim to ensure that products are effective, safe, as well as freely and fairly traded throughout the region.

Entered into force from May 25, 2017, the regulations are aimed at replacing the existing Medical Devices Directives (MDD). The MDR and IVDR are targeted to come into effect from May 2020 and May 2022 respectively. Companies must adapt to these regulations failing to which could result in losing their operational license.

To assist companies in the MDR/IVDR transition, the EC has taken significant steps such as:

While many companies are being due diligent for transition, the United States (US) has raised concerns about the successful implementation of these regulations and sought a delay of three years. Some of the U.S. concerns include:

Apart from the above concerns, the U.S. has stated to the World Trade Organization committee on the technical barriers to trade, that it is worried about their continued access to the EU’s medical device market. Therefore, the U.S. has called upon the EU for three years delay in the implementation.

Reasons for the U.S. Seeking Delay in the Implementation

The U.S. also opined that with the current product standards and the deadlines imposed by the EU, exporters from the U.S. might not adapt to the new requirements. Hence, the US is urging the EU:

For most medical device manufacturers, the transition might seem complicated and a time-consuming process. The only way out for compliance is taking a structured and well-managed approach over the next three years. Stay informed and stay compliant all through the process. Consult an expert.