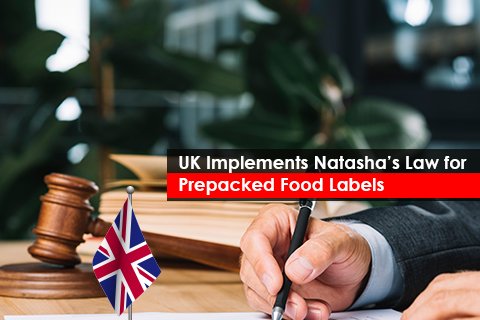 Any food product or ingredient, such as nuts, seafood, peanuts, gluten-containing cereal, latex, penicillin, etc., can pose allergies when ingested into a human body. According to research, generally, food allergies affect 2.5% of the general population.

On October 1, 2021, the UK passed a new labeling law, ‘Natasha’s Law,’ requiring all food retailers to display an entire list of ingredients and allergen labeling on each food item made on the premises and prepacked for direct sale. This law is named after Natasha Ednan-Laperouse, a teenager who died after eating a prepacked baguette containing sesame, which did not require allergen labeling at the time. After this event, the Government decided to implement severe laws that would protect the consumer from ingesting food with allergic ingredients.

According to the law, a prepacked food label must include 14 major allergens. They are listed below:

What is Prepacked Food?

Prepacked food is any food that is placed into packaging before it is ready for sale. According to the new rules, Prepacked for Direct Sales (PPDS) food must display the below information on the packaging:

Labeling for such prepacked foods must align with the legal requirements that apply to naming the food and listing ingredients.

‘Natasha’s Law’ came into force in October 2021, giving businesses a transition period to prepare for the new rules. This law, eventually, is expected to bring more consistency in the labeling regulations of prepacked food products besides preventing end consumers from consuming food that has allergic ingredients.

To be compliant, it is crucial to evaluate the preparedness of the prepacked food manufacturers for the new rule. Reach out to the Food Regulatory experts at Freyr to stay compliant with the latest regulations.