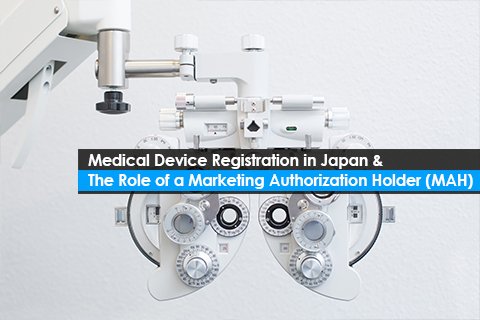 Globally, the Health Agencies require foreign medical devices and IVD manufacturers to appoint a local representative. In Japan, under the revised Pharmaceuticals and Medical Device (PMD) Act, the In-Country Caretaker (ICC) system was replaced with Marketing Authorization Holder (MAH) system. Under this system, companies shall obtain a MAH license to get the device approval and market the devices in Japan.

The Marketing Authorization Holder (MAH) must be a local entity located in Japan. Domestic manufacturers can directly obtain the MAH license, whereas the foreign manufacturer shall identify a local entity to comply with this MAH requirement. 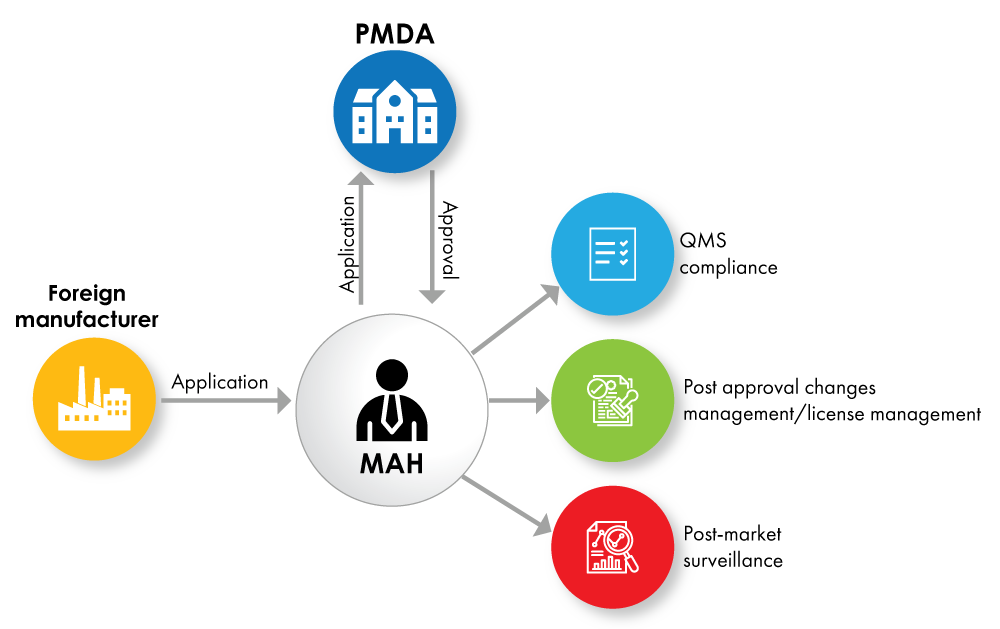 Fig. no. 1: Device Registration Flowchart with MAH as a License Holder

Fig. No. 2: Device Registration Flowchart with DMAH as a License Holder

Establish a Subsidiary in Japan

Foreign manufacturers can set up a local office in Japan and act as a MAH to launch their products in Japan. This enables the foreign manufacturer to have full ownership and complete visibility of their product/s in Japan. This might not be a preferred choice for small-sized manufacturers as the cost associated with setting up a subsidiary in Japan and maintaining Ministry of Health, Labor and Welfare (MHLW’s) quality requirements is quite expensive.

Distributor as a MAH

It is a cost-effective way for foreign manufacturers who do not have a local office in Japan. The importers or distributors can be appointed either as a MAH or a DMAH. Considering the revenue generated from device sales, the importers and distributors usually do not charge additional fees to act as a MAH or a DMAH. The manufacturers, however, face challenges in attaining market penetration as the distributor acting as a MAH might not be open to issuing a No Objection Certificate (NoC) to other distributors. The distributors, sometimes, do not cooperate with the foreign manufacturer in changing the MAH and transferring the device license to the newly identified MAH/DMAH.

A MAH/DMAH acts as a representative on behalf of the foreign manufacturer and assists in the approval of devices in Japan. The main responsibilities of a MAH/DMAH include:

As the MAH/DMAH must follow all the safety, Quality Management System (QMS), and Good Vigilance Practice (GVP) measures on behalf of the foreign manufacturer; it is extremely critical to choose the right MAH/DMAH. Hence, the foreign manufacturers shall thoroughly evaluate all the options before opting for the best possible MAH model. They include carrying out a feasibility analysis, determining the RoI, relationship with the importers and distributors, available budget, portfolio size, profit for device sales, timelines for device launch, etc. Manufacturers must meticulously choose whether to award the device ownership to the MAH or appoint a DMAH and retain the ownership with them.

To know more about MAH/DMAH requirements in Japan, reach out to a regulatory expert at Freyr. Stay informed. Stay compliant.