Resolution for Regulation of Software as Medical Device (SaMD) in Brazil 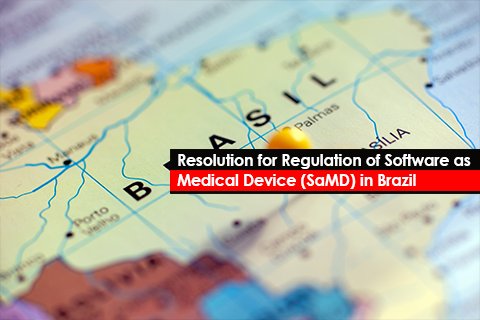 The National Health Surveillance Agency of Brazil (ANVISA) published a resolution RDC no. 657 on March 30, 2022, regulating Software as a Medical Device (SaMD). The resolution has been effective since July 1, 2022.

This definition includes, among others, software licensed by subscription and centrally hosted (Software as a Service), which falls within the definition of medical devices.

What Category of Medical Software is Subjected to this Resolution?

The new RDC 657/2022 explicitly states that it is not applied to the following:

In addition, the SaMD must be framed in the rules and classes following the resolution RDC no. 185 of October 22, 2001.

The other points to notice are:

Also, for the English and Spanish menu, the meaning of each item and command should be explained for instructions of use; and the need for language fluency for operators must be looked over. In addition to requirements stated by RDC 185/2001, the labeling of SaMD must also fulfill the below requirements:

Last but Not Least

The regularization of SaMD must follow general provisions of medical devices, especially RDC 185/2001 and RDC 40/2015, including its update.

In the case of risk class I and II SaMD, a duly completed application form for software notification must be submitted and available on ANVISA’s electronic portal. The technical documents of the SaMD notification regime, risk class I & II, which remain in possession of the company holding the notification, must contain the following:

The manufacturer will not be able to commercialize the SaMD, and its update with the expired or canceled regularization. SaMD is subject to audit, market monitoring, and inspection by the competent Health Authority (HA). In case of irregularity, regularization may be suspended till the identified problem is rectified.

The amendments done in the software regulations by ANVISA can ease the burden of the manufacturer as the above changes seem to ease the language barrier and can also help in the preparation of the documents required to market their SaMD on time.

To gain further insights about an impact assessment on Regulatory services in Brazil and other LATAM countries, consult our Regulatory experts!