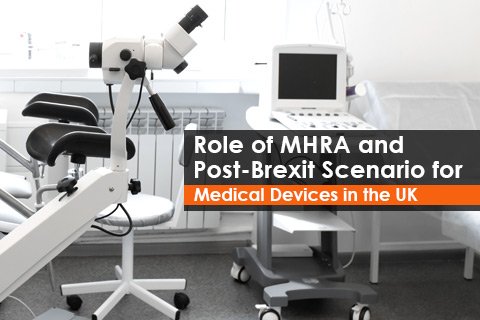 Since the commencement of Brexit transition timelines, the entire medical devices community is underway to understand its impact on future trade and Regulatory relations between the European Union (EU) and the United Kingdom (UK). As noted, the UK left the EU on January 31, 2020, as per the Withdrawal Agreement between both the countries. The agreement brings up a transition period until December 31, 2020, which intends to give time for national administrations, businesses and citizens to get ready for the significant changes due to the Brexit. During this transition period, rules and regulations of the EU will continue to apply to the UK and it will remain part of the EU’s single market and customs union.

As the Brexit transition period is drawing to close on December 31, 2020, the UK’s Regulatory Authority, Medicines and Healthcare Products Regulatory Agency (MHRA) will take over the current EU responsibilities for medical devices and In vitro diagnostics (IVDs), from January 1, 2021. Accordingly, the MHRA has published guidance on the new rules that will govern the regulation of medical devices and IVDs placed in Great Britain (England, Wales and Scotland), Northern Ireland and EU market, post the transition period (however, different rules will apply to Northern Ireland).

The MHRA guidance will provide information on how the UK system will operate for device certification, conformity assessment and registration with the MHRA. As there will be a number of changes to be considered while placing medical devices in the Great Britain market from January 1, 2021, let’s look into the key requirements among them:

Manufacturing and Supplying Devices in the UK

The below summarized key differences will be applicable for manufacturers based in Northern Ireland:

With the updated guidance, the Agency (MHRA) claims its commitment to improve the standards and scrutiny of medical devices that reach the UK patients and an opportunity to develop a robust, world-leading Regulatory regime for medical devices that prioritize patient safety, by considering the international standards and global harmonization. No matter how the Brexit will finally shape up, substantial changes, for sure, will commence on January 1, 2021. Therefore, it is highly recommended for medical devices manufacturers to understand the respective Regulatory changes and prepare for a smooth Brexit transition before in hand. Aren’t you Brexit-ready, yet? Gain insights. Stay informed. Stay compliant.