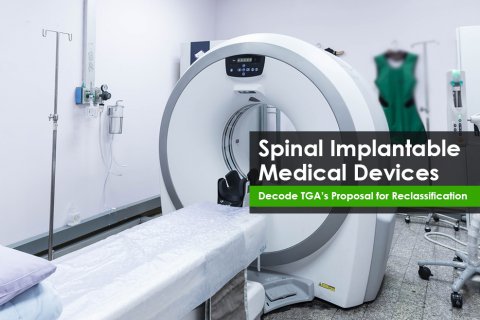 Australia’s Therapeutic Goods Administration (TGA) published a consultation paper on 11th February 2019 to receive effective feedback from the industry regarding the proposal of reclassifying spinal implantable medical devices to a higher level of classification. The proposal is an effort by the TGA to align its Regulatory requirements with that of the European Union’s Medical Device Regulations (EU MDR). The decision was taken after a report was received from the Australian government consisting 58 recommendations from a 2015 Expert Panel Review of Medicines and Medical Device Regulations to reform the Regulatory framework of the TGA with respect to medicines and medical devices.

As of now, existing Australian MDR does not have any specific classification rule or guideline for spinal implantable medical devices. But it has been observed that Rule 3.4 of the Australian MDR nearly applies to them.

How are the manufacturers affected?

If the Regulatory changes come into effect, sponsors entering the Australian market will be required to submit the conformity assessment documents of the manufacturers. The sponsors of spinal implantable medical device will also be required to apply for inclusion of their devices as Class III in the Australian Register of Therapeutic Goods (ARTG). If the inclusion is successful for devices falling under the Prostheses list, a new ARTG entry for the device will be issued by the agency.

The TGA has proposed to bring the new classification for spinal implantable medical devices in Australia from August 2020. If an application is submitted to the agency before the implementation of the rule, the sponsor will have to make the necessary transition arrangements within the transition period. Once the proposal takes effect, the following actions might be required:

Even though the new regulations are adopted from the EU MDR, they have been altered to align with the legislation of Australia. The industry experts are requested to consider all the aspects of the new and the old classification before submitting the consultation paper and feedback. The TGA will accept the feedback on this matter till 25 March 2019.

Whether the proposal is in the favor of the TGA or not, it can only be decided once the feedback is received from the industry. Till then, enter the Australian medical device market compliantly. Stay informed. Stay compliant.