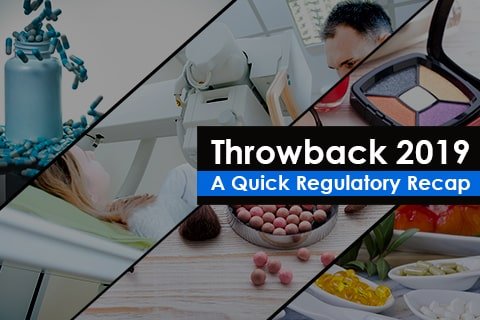 Invention has no limits. It is a continuous process. With many medicinal products and medical device rolled out in the market, the year 2019 has been a boon for Life sciences industry. For good, the industry has seen a significant growth. All thanks to the governance of global health authorities.

The global health authorities were quick enough to alter their governing approaches in reviewing and approving the drug/device inventions. They imposed strict rules to abide by, they continuously released guidance documents to refer to, and they invented new Regulatory pathways for quick product approvals and their market reach. Before we bid farewell to 2019, let’s take a quick recap of all the notable Regulatory changes that made an impact on the life sciences industry.

In 2019, the FDA released a final guidance on the Child-Resistant Packaging (CRP) Statements that will be used for drug labeling. The guidance was released by the agency in order to help the manufacturers and distributors ensure the authenticity of CRP statements and their compliance with the Consumer Product Safety Commission (CPSC) Regulatory standards. It also provided guidelines for text recommendations that should be considered while including CRP statements for drug products. The guidance provided additional recommendations for both prescription and non-prescription drug products.

In order to align with the global labeling standards, the TGA has proposed changes to the labeling regulations pertaining to medicines. The purpose of bringing these changes was to improve the quality and consistency of information provided through labels. The agency made changes to Active Ingredient Information, Medicine Information, Critical Health Information, Pharmacy Dispensing, and Allergen Information.

FDA Publishes New Amendments for ‘Deemed to be Licensed’ as Biologics

The FDA published new rules regarding the transition of biological products that are currently approved as drug products and are ‘‘Deemed to be Licensed’ as Biologics. The new rules were expected to amend the regulations pertaining to the use of Drug Master Files (DMFs) for biologics. The purpose of the new rule was to ensure that there is adequate supply of the biological products in the market.

To address the threat of cyber security on medical devices, all member health authorities of the International Medical Device Regulators Forum (IMDRF) have released draft guidance documents with Regulatory policies for premarket settings. In relation to the same, the Therapeutic Goods Administration (TGA) of Australia anticipated the need for regulation even in the post-marketing stage of devices and released a draft guidance that span across the total product life cycle (TPLC).

Through this guidance, TGA highlighted the cyber security framework developed by the US National Institute of Standards and Technology, which also includes some common examples of vulnerabilities, known standards which can help strengthen the security, and instructions for end-users, clinical trials and healthcare set-ups using the devices.

The National Medical Products Administration (NMPA), formerly known as China Food and Drug Administration (CFDA), is all set to impose stricter regulations on auditing and reinforcement of clinical trials. To ensure best practices for In-vitro Diagnostic Device (IVD), the agency released “Draft IVD Clinical Trial Guideline for Feedback” on November 22, 2018. The guidelines were expected to come into effect in 2019.

The new guidelines are developed basing on the clinical guidelines published in September 2014. Because of the requirement of fresh samples and significant sample sizes, the cost of clinical trials may go up with the implementation of the new guidelines.

Health Canada (HC) has the most stringent regulations for medical devices. To further increase the safety and effectiveness of the devices, and to optimize the health outcomes for end-users, the Canadian health authority (HA) was in plans to strengthen the then Regulatory framework. As part of the plan, they have three-part strategy. The aim of the action plan was to take the end users’ perspective into consideration while developing policies and regulations in future and thus, to improve communication. Each one of the three parts of the proposed medical device action plan has a sub-set of activities with approximate timelines all through the 2019. In order to successfully complete these activities, HC has also set milestones to ensure the objectives are achieved.

Australia’s Therapeutic Goods Administration (TGA) had published a consultation paper on February 11, 2019, to receive effective feedback from the industry regarding the proposal of reclassifying spinal implantable medical devices to a higher level of classification. The proposal was an effort by the TGA to align its Regulatory requirements with that of the European Union’s Medical Device Regulations (EU MDR). The decision was taken after a report was received from the Australian government consisting 58 recommendations from a 2015 Expert Panel Review of Medicines and Medical Device Regulations to reform the Regulatory framework of the TGA with respect to medicines and medical devices.

As the Brexit deadline is fast approaching, the occurrence of a no-deal Brexit is likely. In this context, the Medicines and Healthcare products Regulatory Agency (MHRA) of the UK had updated its no-deal Brexit guidance on the regulation of medicines, medical devices, and respective clinical trials. According to the update, medical device manufacturers wishing to place a device in the UK market must have a ‘UK Responsible Person’ to register their devices with the MHRA, as similar to the European Union (EU) authorized representative.

The countdown begins for the EU MDR & IVDR

The EU MDR and IVDR entered into force on May 25, 2017 and are mandated to be effective from May 2020 and May 2022 respectively. Companies must adapt to these regulations failing to which may result in losing their operational license.

While many companies are being due diligent for transition, the United States (US) has raised concerns about the successful implementation of these regulations and sought a delay of three years. The U.S. also opined that with the current product standards and the deadlines imposed by the EU, exporters from the U.S. might not adapt to the new requirements. For most medical device manufacturers, the transition might seem complicated and a time-consuming process as the effective date is approaching. For the U.S., they still have time till 2024.

Animal testing has been the talk of the cosmetics industry for quite a long time now. Health authorities across the globe are trying to impose ban on animal testing of cosmetic products. In that perspective, some countries have taken nimble steps towards creating a cruelty free cosmetics market. For example, the Australian government passed a bill in February 2019 to put a complete ban on animal testing in the country for cosmetic products. The government has given a deadline till July 2020 to the manufacturers to align and strategize their operations as per the new regulations.

Although the plan of upgrading the Act is still under scrutiny, the FDA is taking every measure to ensure that safe and effective personal care products are made available to the consumers.

In 2017, the European Commission (EC) updated the regulations related to the cosmetic product claims under the EU Regulation (EC No. 655/2013). The updated regulations came into effect from July 1, 2019. As per the latest regulations, ‘Annex III – Free From claims’ and ‘Annex IV – Hypoallergenic Claims’ were added to the existing cosmetic claims regulations. The purpose of introducing these annexes was to help the consumers make an informed decision while buying a product.

The Food Safety and Standards Authority of India (FSSAI) had issued a draft regulation pertaining to the safety standards of infant nutrition. In India, most of the nutritional products for infants with Inborn Errors of Metabolism (IEM) are imported from foreign countries. With the FSSAI’s new proposal for regulations, companies in India are expected to be able to manufacture IEMs locally. The draft proposed by the FSSAI was an updated version to the 2011 released regulations for infant food nutrition and covers the safety standards required for the manufacturing of infant formula for special medical purpose.

On May 27, 2016, the United States Food and Drug Administration (US FDA) published a final rule for nutrition and supplement facts label in the Federal Register. The final rule ensures that the labels reflect new scientific information including the link between diet and chronic diseases like obesity and heart disease. The new rule intended to ensure that the product label is in line with current food habits and practices which are not clearly established in the old label rule. Another significant update of the rule was that the FDA had declared compliance deadlines basing on the annual food sales of the organization.

To sum it up, the year 2019 has been quite eventful in terms of evolving mandates and regulations that were introduced for the betterment of the life sciences industry and in turn for the human health. And as a Regulatory services provider, Freyr was always on its toes to track all the important Regulatory updates, and also made it a point to notify them to the manufacturers through a series of blogs, webinars, and newsletters.

Considering the rapid growth of the industry, and with the ever-evolving regulations, we can firmly say that the year 2020 too will have a lot more to look after, to learn, to align with, and to be complied with. Stay tuned. Stay updated. And Stay compliant.